A massive squall line / derecho extends from southern Ontario / eastern Lake Superior through northern Lake Michigan into central Wisconsin as of 9:30 am CDT/10:30 am EDT. This squall line will come ashore any minute in extreme northwest Lower Michigan with special marine warnings in place and likely severe thunderstorm warnings to come. Currently, multiple severe t'storm warnings are in effect north/northwest of Milwaukee and south/southwest of Green Bay, Multiple reports of wind gusts to 60 mph and tree damage have been received already this morning in central WI with this line, especially in Marquette, Marinette, Waupaca Counties. 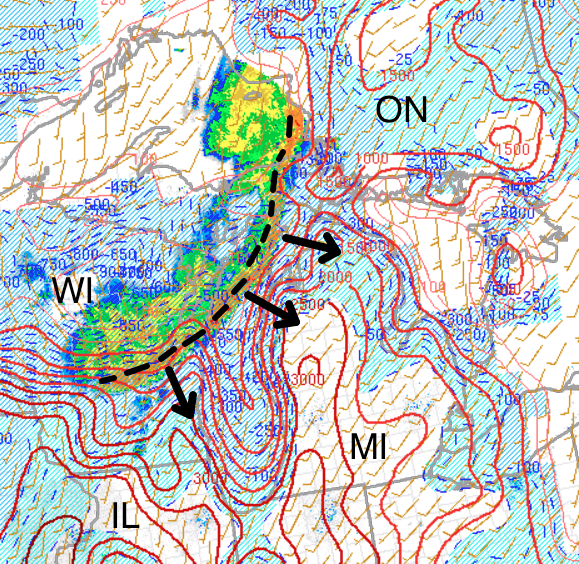 Latest SPC mesoanalysis shows strong instability in place ahead of this squall line especially across western Lower Michigan even this early in the diurnal cycle with dew points well in access of 70F bleeding off the Corn Belt to the southwest. Deep-layer wind shear is strongest to the north, with upper-level flow dropping off dramatically to the south. As we progress through the morning and into the early afternoon, I would expect the line to weaken slightly as it drops into southern WI while the central/northern Lower Michigan portions of the squall line likely will re-intensify given the greater balance between the counter-rotating gyres at the apex of the line from stronger wind shear, and especially the robust instability axis there. 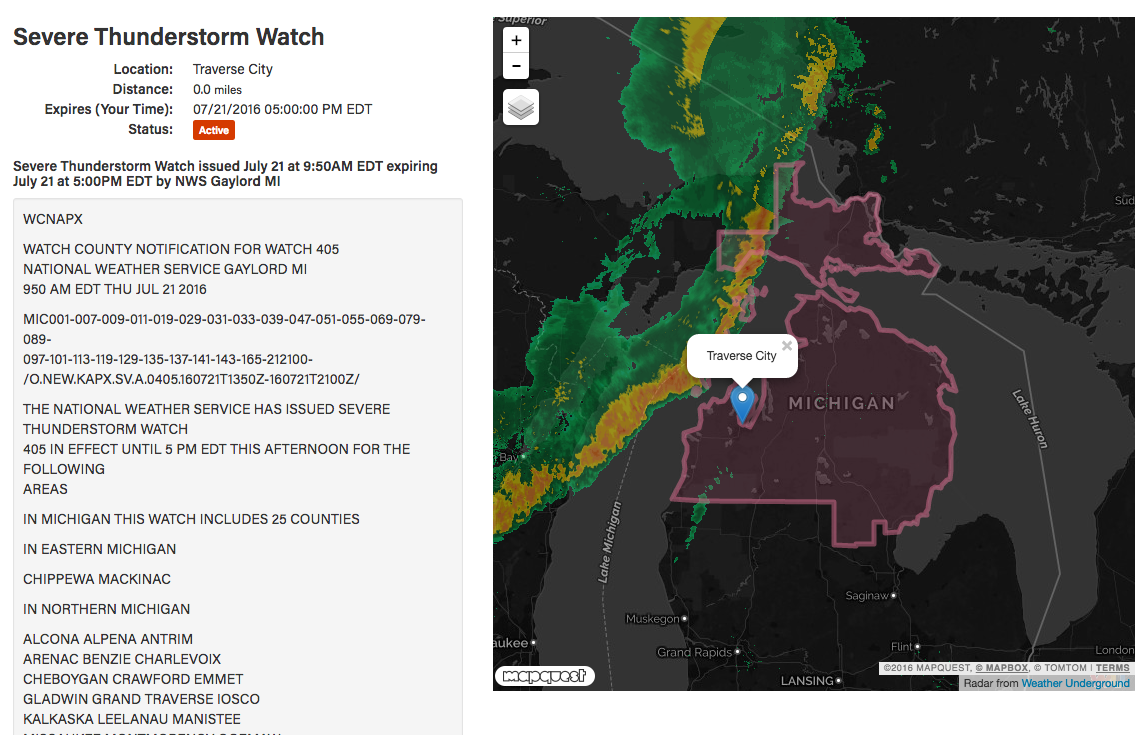 Severe thunderstorm watches are in effect until 5 pm from Milwaukee, WI to Grand Rapids, MI and to the north and northeast, including also Traverse City, Gaylord, Houghton Lake, Mt. Pleasant, and Alpena. Strong-to-severe straight-line winds are the predominant threat with this line as it moves through central/northern Lower Michigan. The storms will likely weaken well below severe limits before reaching locations like Chicago to Detroit given the rapid drop off to the south into the high pressure dome. 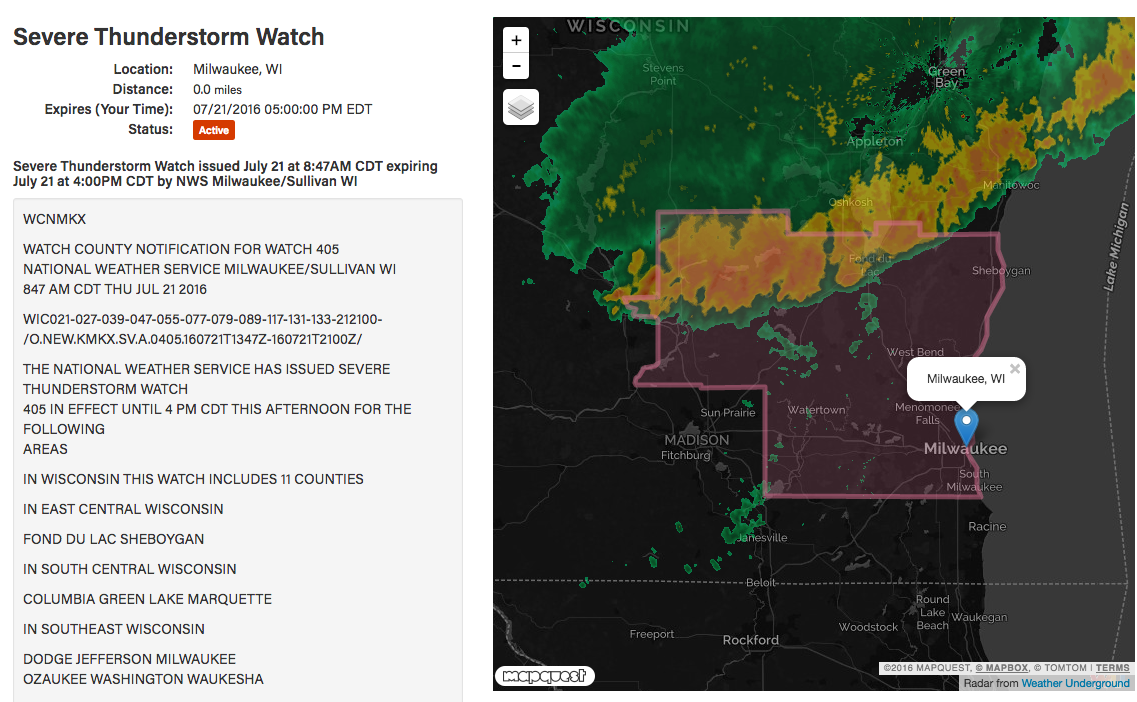 This massive squall line could be the saving grace preventing a much more robust severe weather threat with all hazards possible from materializing late afternoon/evening across this same region, but only time will tell how the air mass recovers. However, it is very doubtful that the thermodynamics and kinematics will recover sufficiently evening by evening to support much of a supercell threat. Still though, some short-range models are showing an atmosphere favorable for even isolated tornadoes especially across northern Lower Michigan by 5-8 pm, but even in these more aggressive models, widespread redevelopment of storms later on is not shown despite decent atmospheric recovery behind the line. 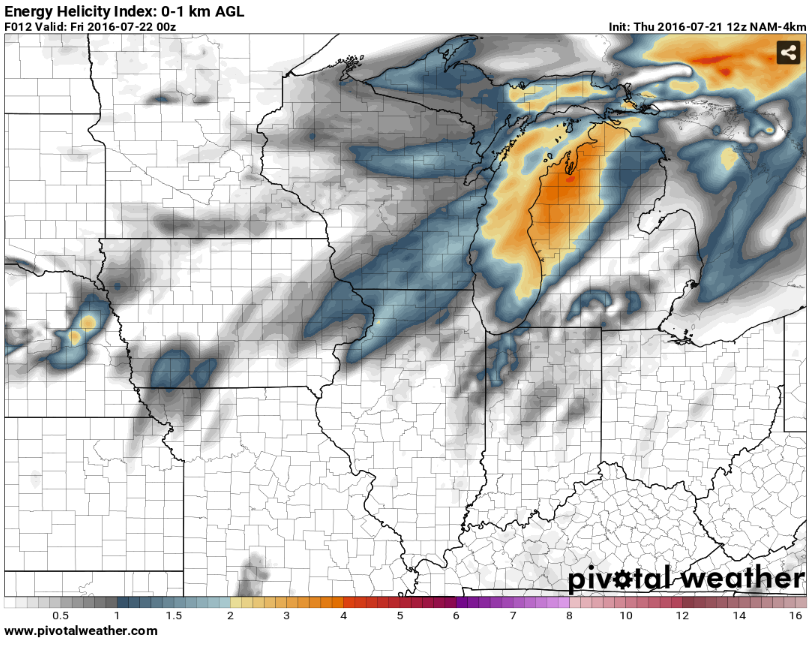 On Friday, the severe weather threat shifts to New England (see later blog posts for the forecast), and also again ahead of a new subtle shortwave across the Dakotas. Likely, we will see more mesoscale convective systems and/or derecho events around the top of this massive high pressure ridge that has taken over most of the U.S. Stay tuned and stay safe out there!