Despite the main core of the Polar Front Jet Stream still residing well north of Canada, a high-amplitude trough will traverse the central/northern Great Plains today, bringing with it modest but sufficient upper-level flow for organized severe storms in the warm sector. The strongest upper-level dynamics will remain from eastern NE north with this system, but an MCS currently moving through southwest MN/northwest IA will limit destabilization this afternoon under the best kinematics for supercells/tornadoes. Moderate instability will develop farther south, especially from a weak dry line/cold front intersection in south-central NE and just east of the dry line through southwest KS, but low- and deep-layer wind shear will be marginal for tornadic supercells.

The HRRR model seems to have the best handle with the above mentioned morning/early afternoon MCS, and sustains the convection as it moves slowly east. The HRRR limits drastically the instability that develops behind this MCS over eastern NE/SD as compared with the 4 km NAM, which seems like the most realistic solution as we approach noon CDT. I do believe that the 4 km NAM has the most realistic depiction of convective evolution for the rest of the warm sector to the south (shown here is the 12z 4 km NAM forecast 0-3 km EHI for 7 pm CDT). I believe the most likely areas for supercells, including a minimal tornado threat, will be near the dry line/weak cold front intersection in south-central NE to near the KS border where upper-level winds will be strongest (4-7 pm); and also in southwest KS where a 25 knot LLJ could strengthen a bit toward sunset with storms remaining isolated. 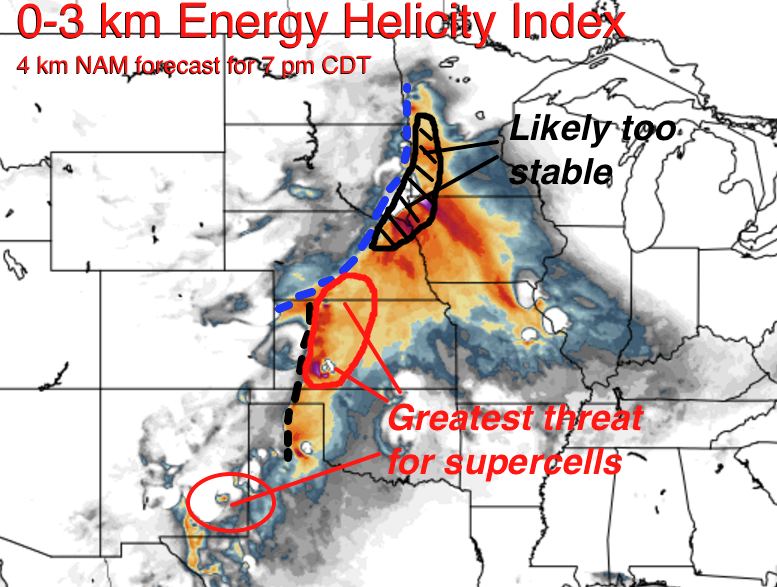 Another area of severe weather will develop in a weak, but moist upslope regime east of the higher terrain in southeast NM, possibly into southern high plains of SW TX. I wouldn't be surprised to a report of a brief tornado or two down there, and would be a great back-up target for storm chasing.

Next week, a more significant storm system could impact parts of the central/southern U.S. as the Polar Front Jet Stream begins to migrate south with the fall season. With the return of more robust severe weather, I'll be bringing back the Warning Aware severe weather threat maps.