Substantial moisture return is underway in the Northeast U.S. warm sector today ahead of a potent upper-level storm system that produced a long-track tornadic supercell yesterday causing damage to the northwest of Indianapolis. Dew points in the low to mid 70s are commonplace to the south of a retreating warm front that was just north of NYC to Cape Cod as of 830 am this morning, with a strong southwesterly low-level jet visible with the low clouds/deep moisture racing to the north over NYC. Moderate to strong instability is expected to overlay strong wind shear by late afternoon ahead of the cold front across eastern PA, central/eastern NY into southwest New England, resulting in a particularly high supercell and tornado threat for this region. 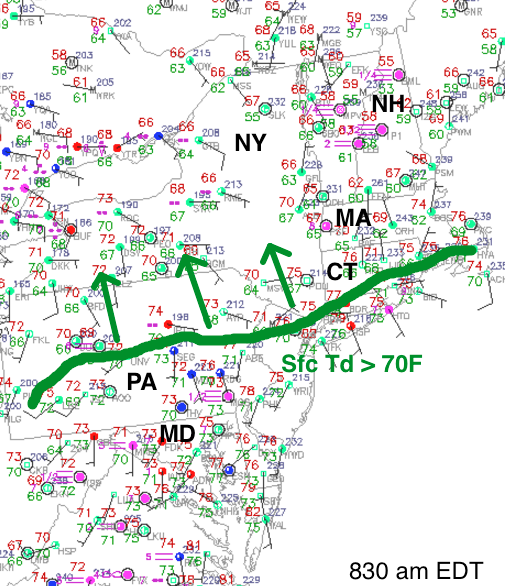 I've included a few forecast fields from the most recent 4 km NAM which has been very consistent with the evolution of the kinematic and surface features with this system for at the last few days. Note the compact, strong 850 mb low resulting in a strong low-level jet of 30-40 knots across the warm sector over relatively backed southerly surface winds expected by late afternoon/evening, which will focus the strongest low-level shear across northeast PA into central/eastern NY. This area will also be at the instability nose with 2000-3000 J/kg surface-based CAPE (in red below) building along and south of the retreating warm front. All short-range models are showing an isolated supercellular storm mode for at least the first few hours after initiation with storm motion vectors largely perpendicular to the advancing cold front. I expect supercells to develop rapidly by 4-5 pm in central NY/northeast PA off the higher terrain to the west of Binghamton, NY and Scranton, PA and quickly develop and isolated tornado threat as they move east. This convection should reach northern NJ, eastern NY by 7-9 pm with a slightly diminishing tornado potential but increasing damaging straight-line wind potential extending into southwestern New England. 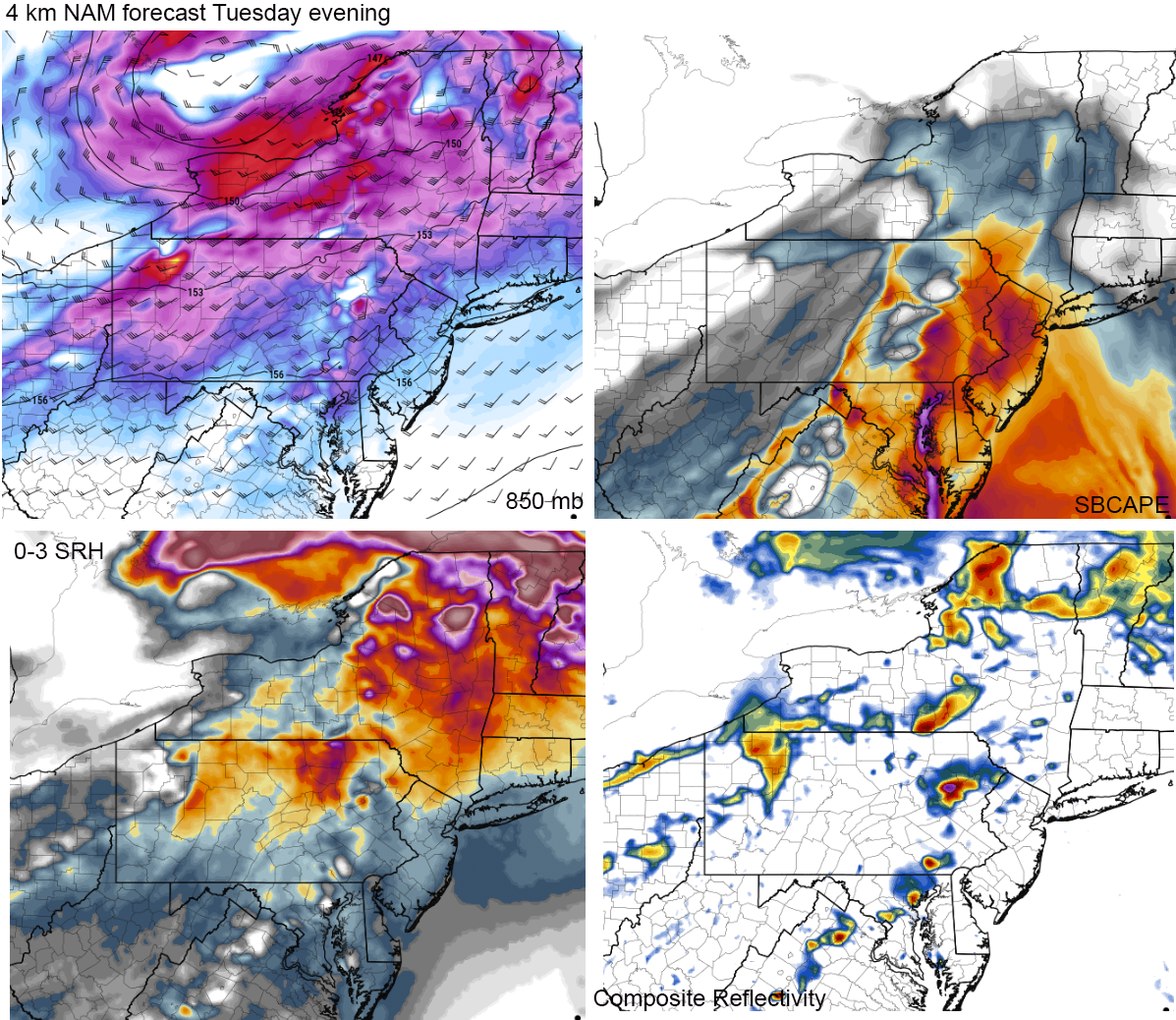 I've include this region from between Scranton, PA and Binghamton, NY inclusive and extending to the northeast toward eastern NY just to the west of Albany in a moderate (3/5) tornado threat where the maximum low-level shear and instability will overlay along with the likelihood of convection. I considered including the I-95 corridor including NYC in a 2/5 tornado threat but I expect the supercells will congeal into line segments or squall line by the time they reach I-95 by late evening. Regardless, a widespread damaging wind event appears likely from northeast PA/central NY east to the I-95 corridor late afternoon through early tonight. Severe storms are also possible across northern IA into southern MN within a high instability/marginal wind shear environment (low, 2/5 damaging wind threat), but any tornado threat would be limited to a mesoscale accident in the central Plains today. 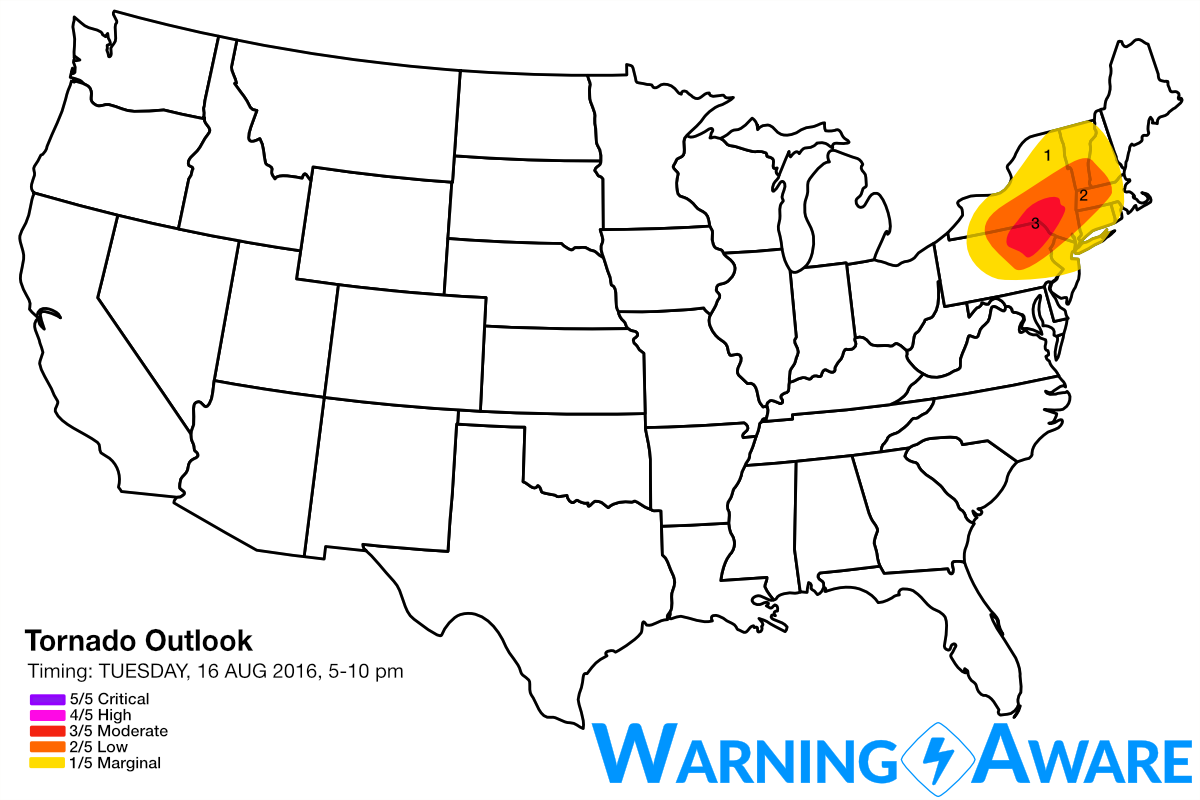 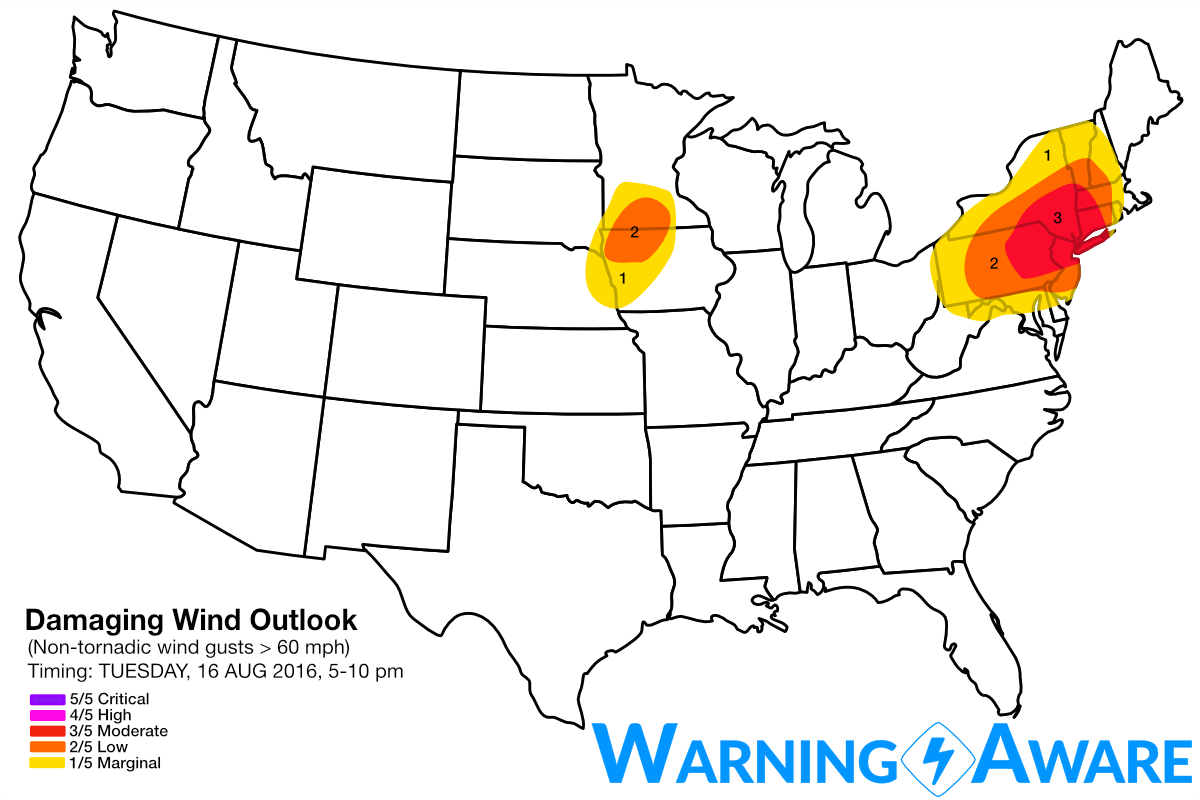