Severe Weather Returns to the Northeast U.S. This Saturday

As has often been the case this midsummer, a potent upper-level trough will dominate the Northeast U.S. this Saturday, with severe storms likely along a cold front that will pass through this afternoon. Dew points this morning were already in the upper 60s and even low-to-mid 70s from southern New England through the Mid-Atlantic region, with substantial solar heating expected ahead of the cold front. The predominant severe weather threat across the Northeast U.S. this afternoon will be damaging straight-line winds, given sub-marginal low-level shear for tornadoes. 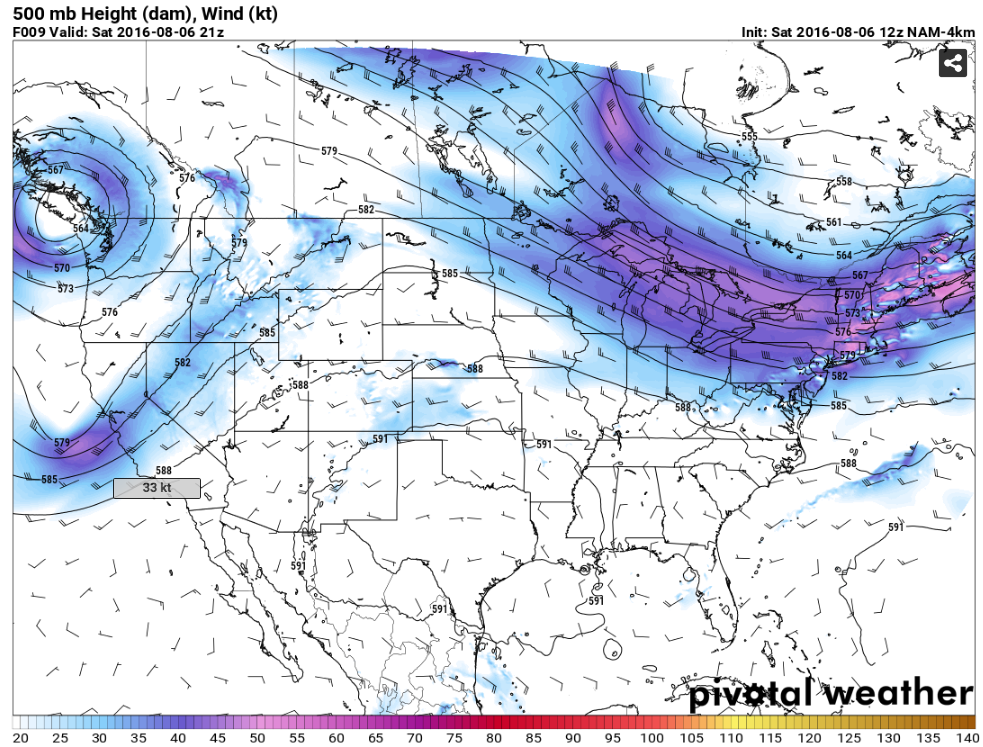 The greatest threat for severe storms (3/5, moderate) will be across southern MA, RI, CT, and southeast NY, where the strongest deep layer shear and instability will coincide and greatest storm coverage is anticipated. Given surface-based CAPE values in excess of 2000 J/kg expected across this region with very little convective inhibition by 1 pm, severe storms will erupt along the cold front between Albany and NYC expected ENE toward New England. Another area of enhanced severe weather (2/5 damaging straight-line wind threat) likely will materialize across central/eastern Maine given colder air aloft to compensate for lower surface dew points and even stronger mid- to upper-level wind fields. A broken line of severe storms is expected to reach the I-95 corridor including Philadelphia to NYC to Hartford through south of Boston by 4-5 pm likely producing widespread damaging straight-line winds, especially given the 30+ knot winds at 700 mb that will easily be transported down to the surface. 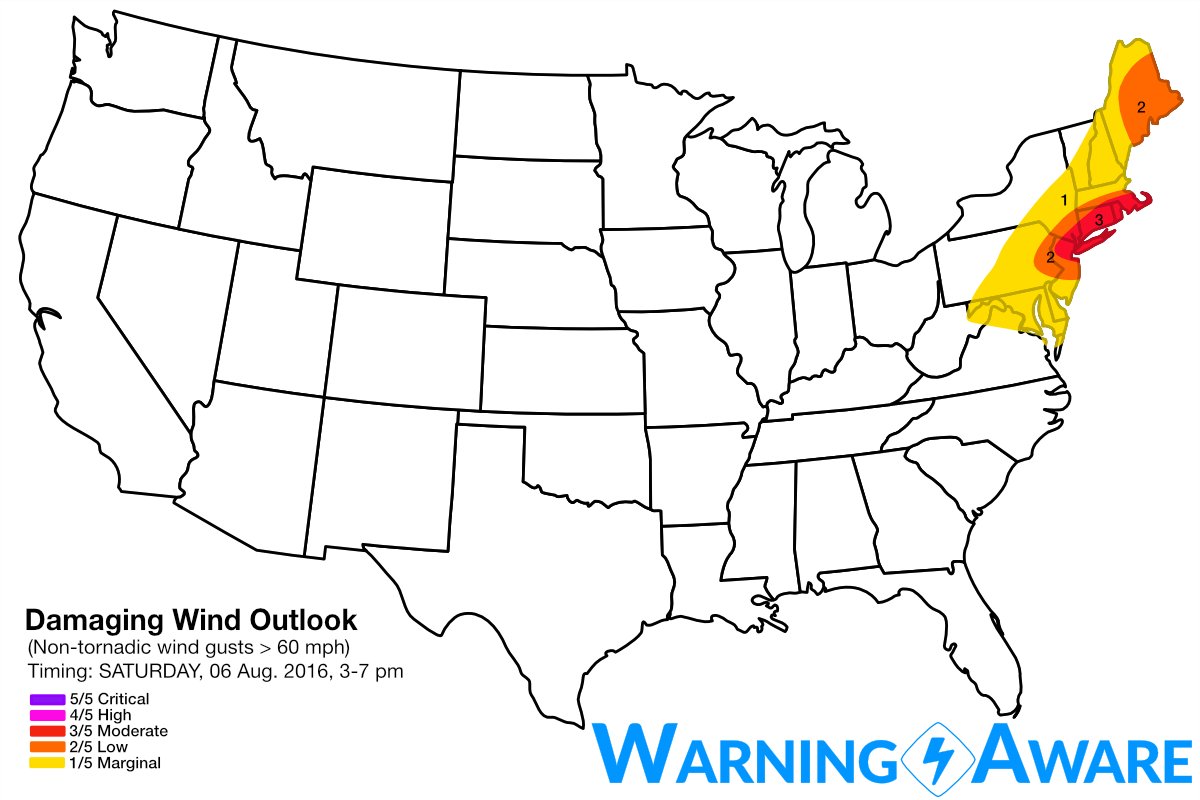 The likely areas for storm initiation by 1 pm EDT can be seen well in the 4 km NAM forecast surface based CAPE field, likely happening first across central/northern Maine with the strongest upper-level forcing and coolest air aloft, and then across the higher terrain of southeast NY into northeast PA near the Scranton, PA area. Given ample deep layer shear these storms will quickly organize into line segments and supercells and move southeast toward the I-95 corridor by late afternoon. 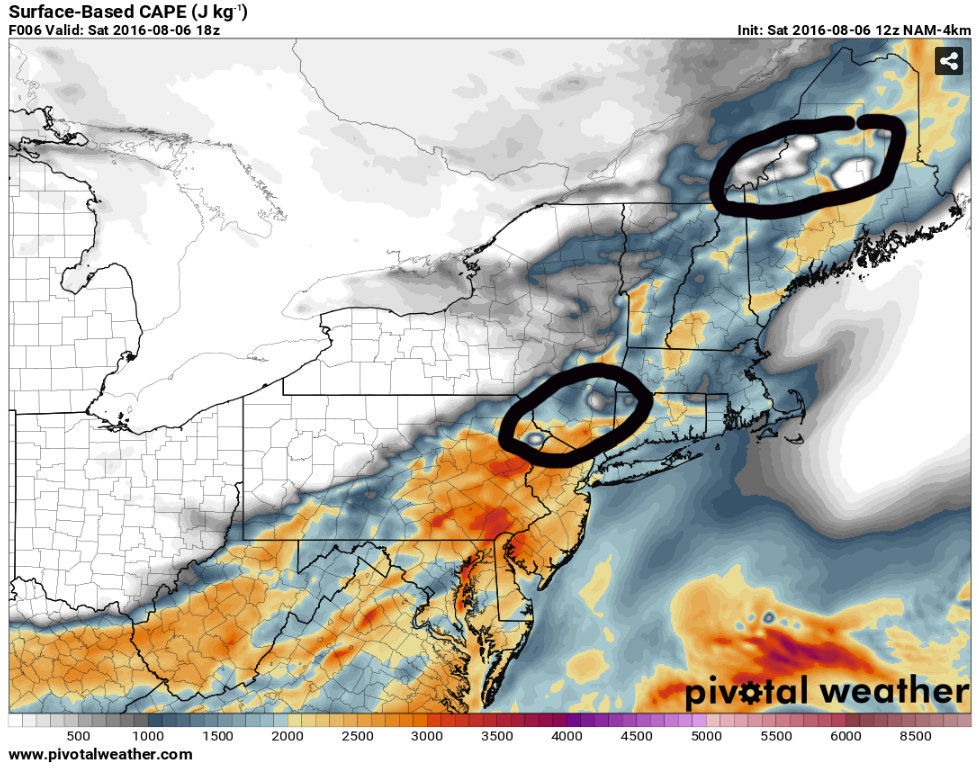 The 4 km NAM model forecasts below are for 5 pm EDT, showing the line of storms along the I-95 corridor from eastern PA through coastal ME.

Other severe storms are possible across central MT into southern Alberta off the mountains, but the severe weather threat will be very isolated up there as the main upper-level trough hangs back over the Pacific Northwest. Eastern CO will also see some summer thunderstorms off the Foothills by afternoon, but nothing they aren't used to out there for this time of year. Some strong-to-severe air mass storms are also possible across Arkansas through the Lower MS River Valley into western MS with the heating of the day as well.