Severe Weather Ramping up Big-Time Across Parts of the Northern U.S.!

A powerful upper-level trough continues to spin over the Pacific Northwest, with a strong Polar Front Jet Stream stretching from the North Pacific through the Canadian Prairies. This semi-permanent trough will bring multiple days of severe weather for parts of the northern High Plains and possibly into the Canada Prairies through the weekend. Meanwhile farther east from central MN through the Great Lakes Region into the Northeast U.S., northwesterly flow severe weather setups will be possible this afternoon and Saturday, respectively, as shortwaves ride around the top of a summer anticyclone dominating most of the central/southern U.S. 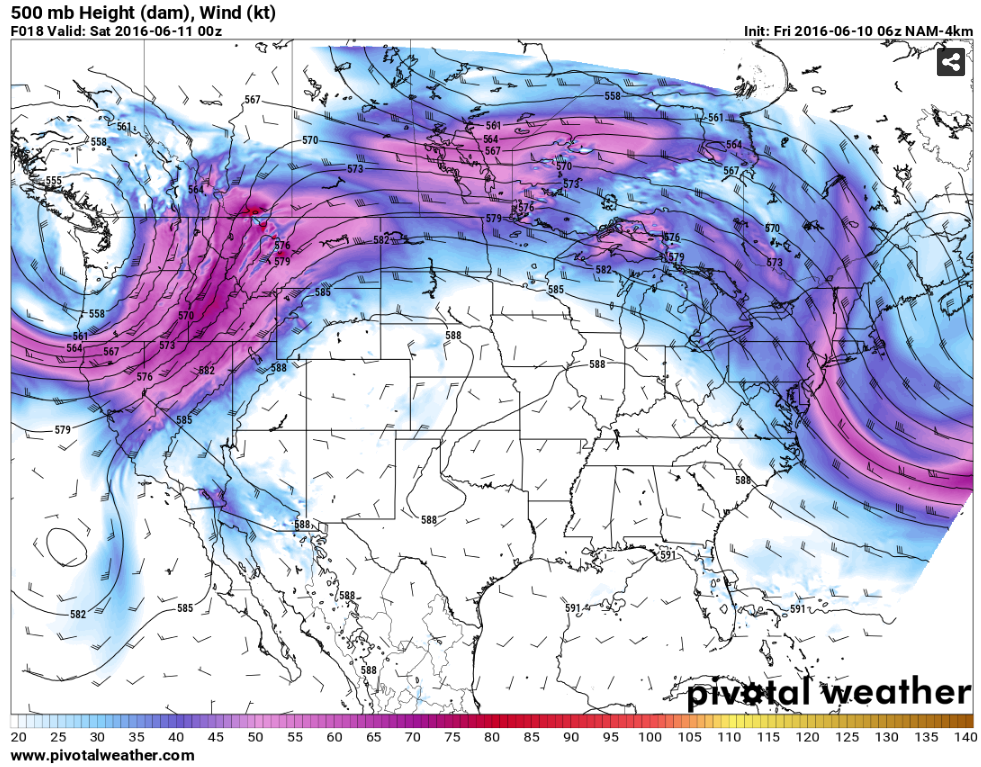 Moisture will recover rapidly today across the northern High Plains with moderate instability developing east of the mountains across central Montana by late afternoon. Storms will develop rapidly off the higher terrain in western Montana by 3-4 pm and quickly become supercellular as they encounter the deeper moisture in central MT. Very large hail and strong straight-line winds will be the main threat with these storms, but isolated tornadoes are certainly possible. Have included central MT in a 3/5 or moderate threat for large hail and damaging straight-line winds given the localized greater storm coverage/intensity expected there this (Friday) late afternoon through evening. These risk areas include Great Falls to Miles City, MT mainly along and north of the I-90 corridor.

Meanwhile farther east, extreme instability will build with dew points in the 70s across eastern SD, central/southern MN into northern WI ahead of a subtle perturbation in northwesterly flow regime. CAPE values exceeding 4000 J/kg will be likely across this region by peak heating, with storms developing in central MN by 5 pm along a weak front/confluence line. These storms will quickly become severe, with deep layer wind shear marginally conducive for supercells. Given the very strong instability in place, isolated brief tornadoes will also be possible with these storms in central MN and as they move into northern WI during evening, despite relatively weak low-level wind shear. A complex of storms with straight-line winds becoming the main threat will evolve across the northern MS River Valley especially near/after sunset as these storms congeal. 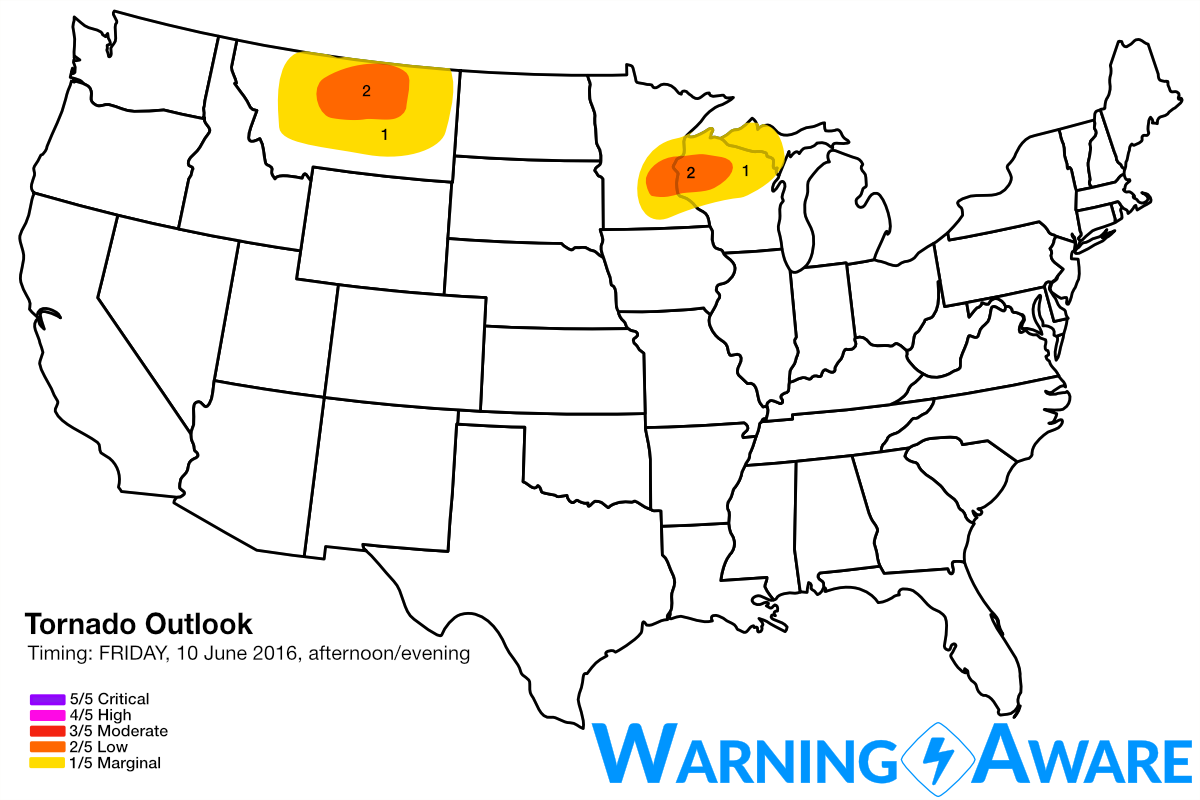 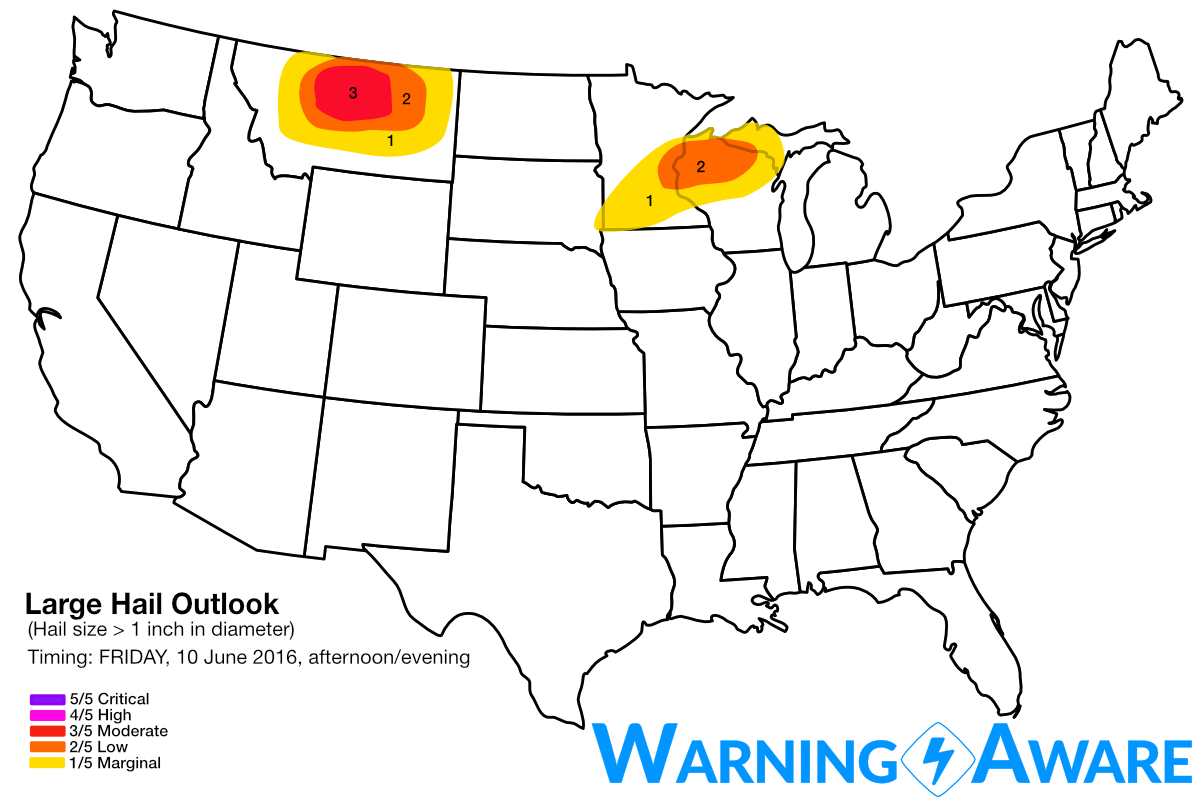 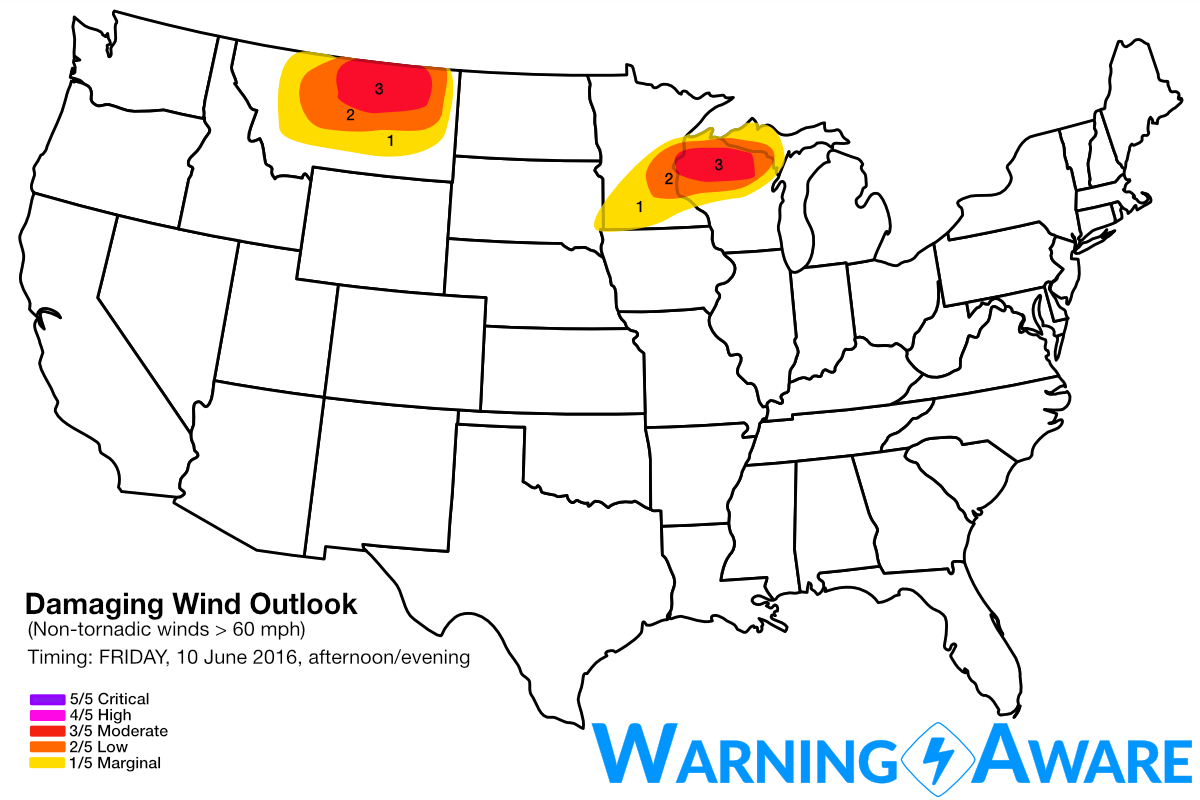 A much more robust tornado threat appears likely on SATURDAY late afternoon and evening across eastern Montana, possibly into western North Dakota, as the aforementioned potent upper-trough slowly slides to the east. Stronger low- and upper-level flow will impinge over the northern High Plains especially near and just after peak heating on Saturday, with easterly low-level flow intensifying over eastern MT into the western Dakotas in response to the resultant surface pressure falls. Supercells should initiate in eastern MT by 4 pm and quickly develop strong mesocyclones given the strong magnitude of wind shear at all levels. Right now for storm chasing, our initial target is near the Glendive, MT area, but the favorable zone for tornadoes could shift north or south as the setup evolves. Given the expected greater storm coverage and much greater low-level wind shear as conducive for tornadoes in eastern MT/extreme western ND on Saturday late afternoon/evening as compared to previous days, have introduced a 4/5 or high threat for large hail and straight-line winds across this region for 11 June 2016, and a 3/5 or moderate threat for tornadoes. 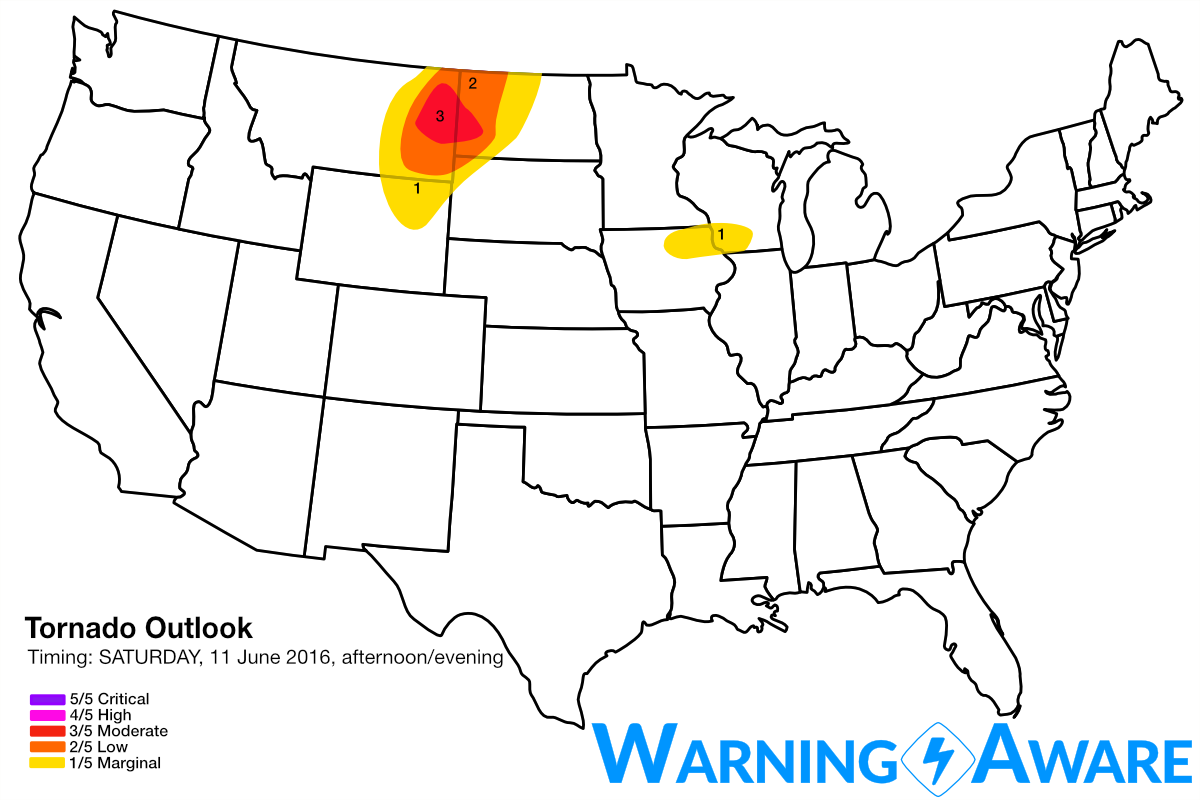 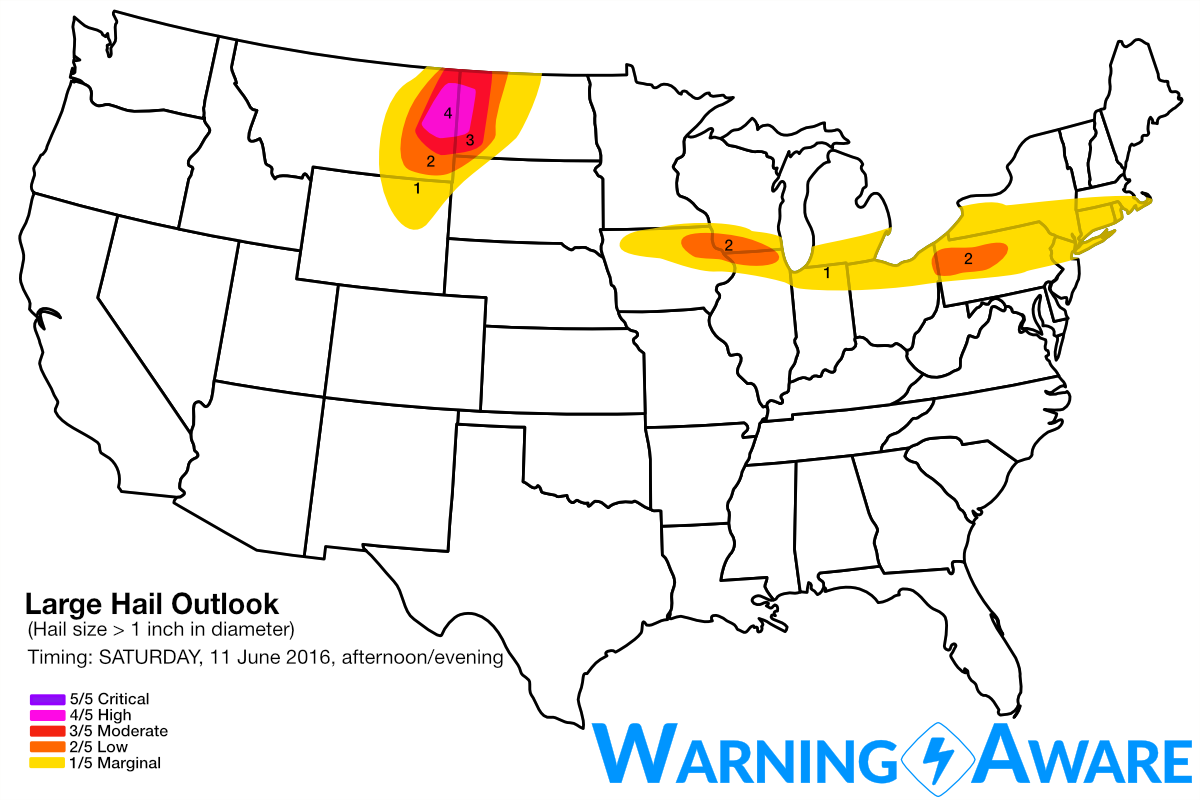 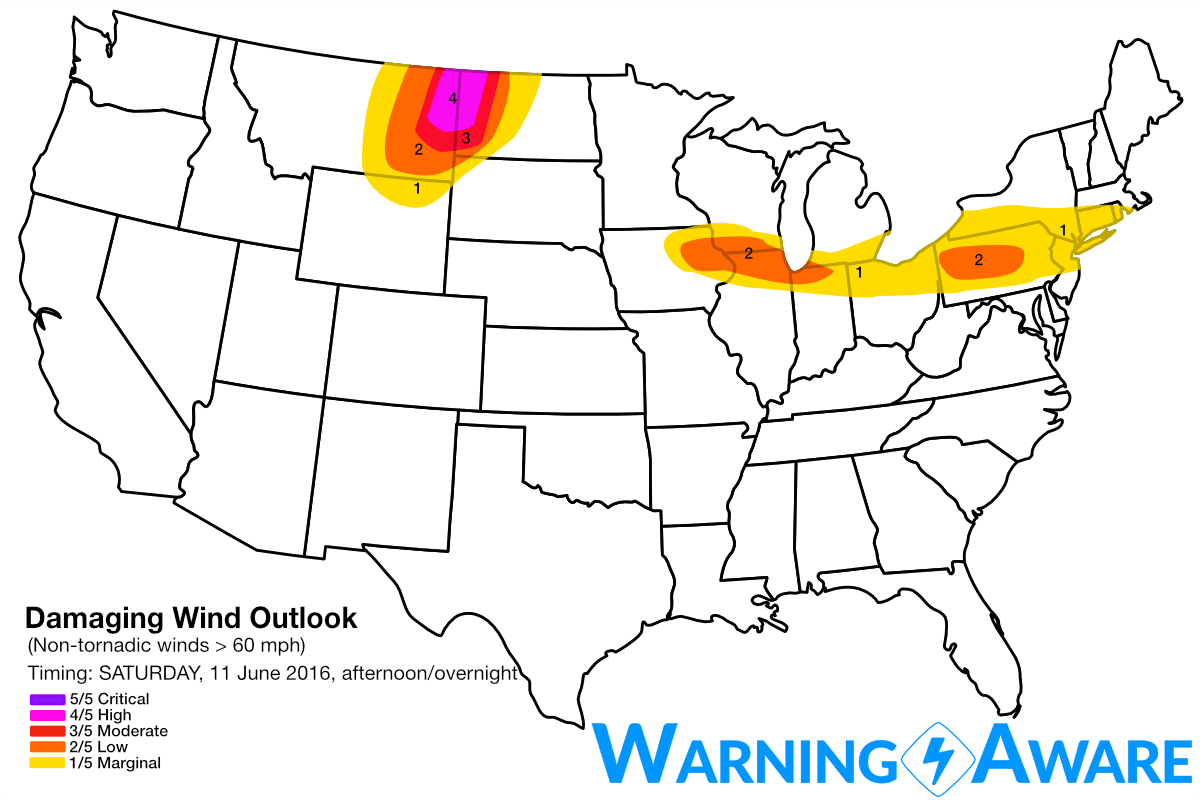 Much less significant severe weather, with marginally severe hail and straight-line winds are also possible on Saturday late afternoon and overnight across northern IA, southern WI, northern IL/IN, PA and across much of the northeast U.S. south of New England. However, the 1/5 and 2/5 threat areas for hail/wind do include major population centers such as Madison, WI; Chicago, IL area especially away from the Lake; Detroit, MI; all the way to NYC. Conditions are not expected to come together for any robust tornado threat east of the northern High Plains on Saturday.