The severe weather season for the East Coast will likely start off with a bang this Sunday, especially across parts of the Mid-Atlantic Region. A double-barreled upper level trough will amplify over the eastern U.S. this weekend, with the lead vorticity maximum forecast to be over the Upper Great Lakes Region by Sunday afternoon. Ahead of this trough, strong mid and upper-level winds with 60-70 knots at 500 mb will spread over an unstable warm sector east of the Appalachian Mountains by peak heating Sunday, setting the stage for a severe weather outbreak from eastern PA south through VA east to the Atlantic Coast. While damaging straight-line winds and hail will be the main threats, it looks like an enhanced tornado threat could develop Sunday afternoon/evening in the vicinity of a sharp warm front forecast to lift north from the Delmarva peninsula. Based on the forecast position of this warm front, we've decided to include southeast PA, central/southern NJ, northern half of the Delmarva Peninsula, down to northeast VA in a moderate or 3/5 tornado threat. Given the expected supercellular storm mode from southeast PA to the VA/NC border and east, large hail will also be likely with any storms in the warm sector east of the Appalachian Mountains. 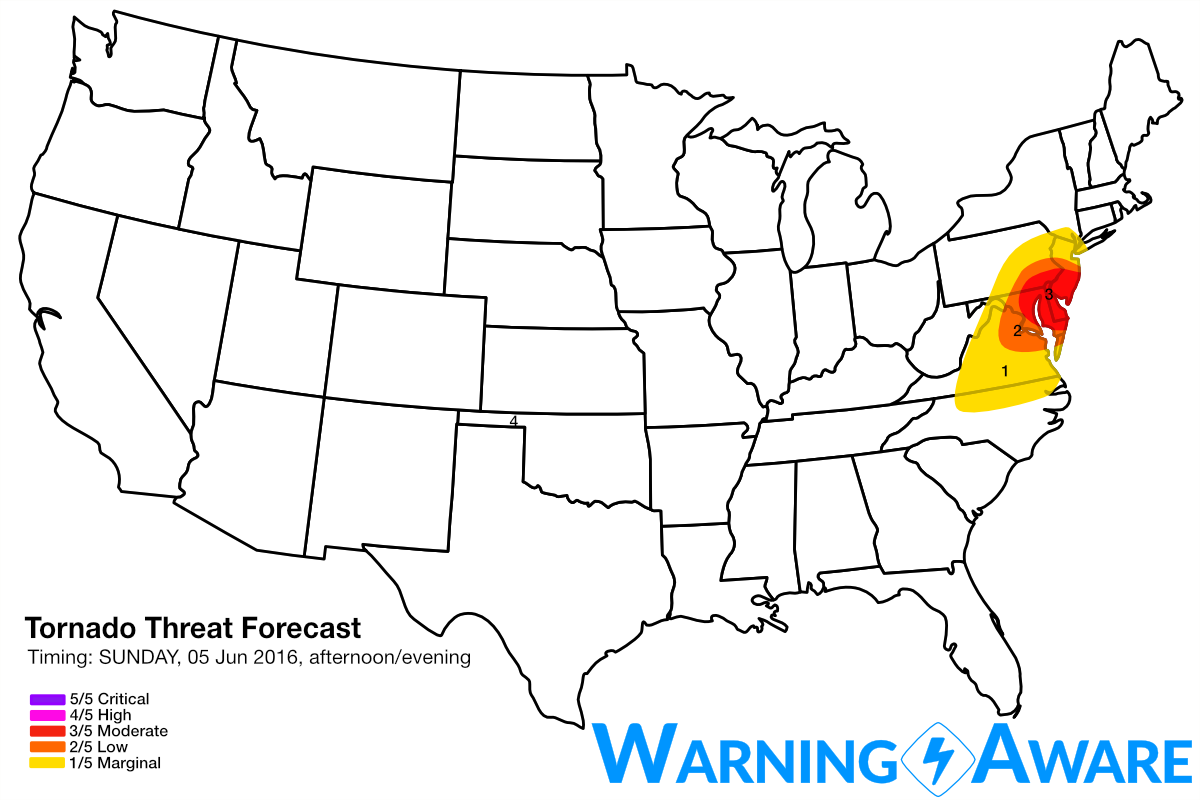 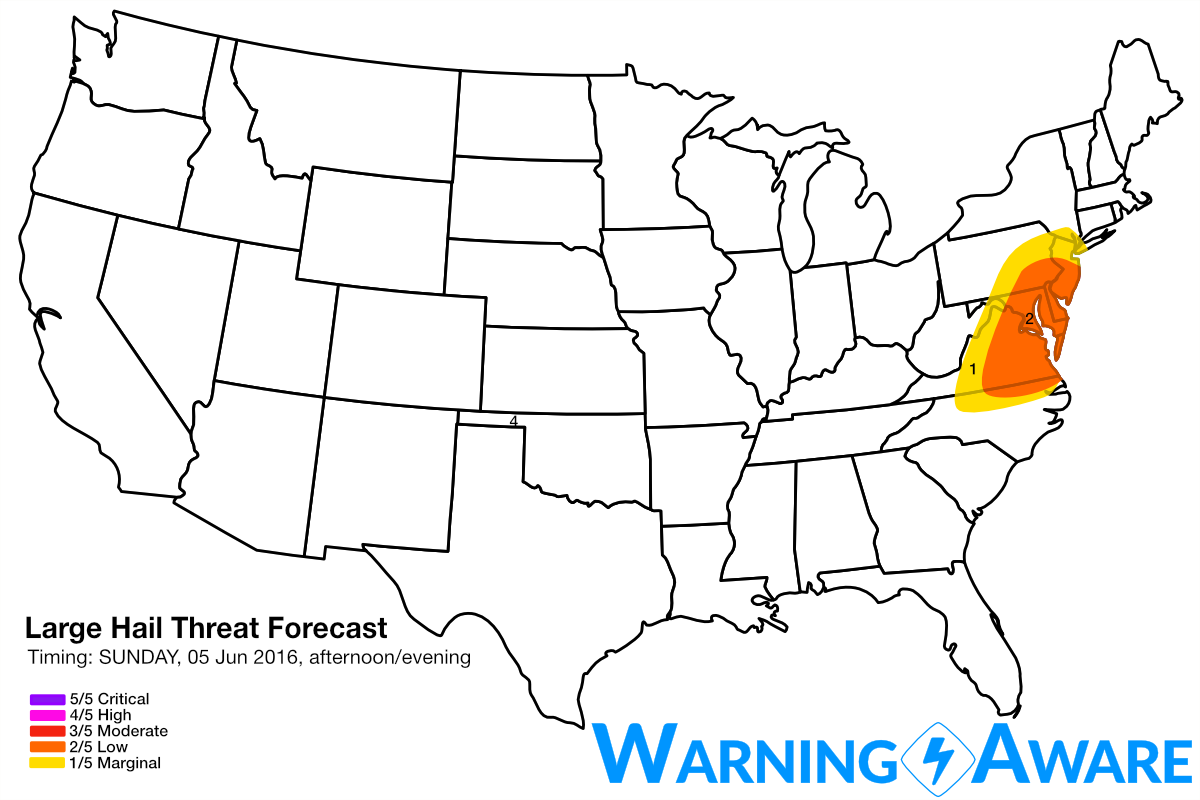 While the main surface low associated with this large-scale upper trough will be up in Ontario on Sunday, high-resolution model guidance is already hinting at a weak surface low forming in southeast PA by Sunday afternoon, with a sharp warm front extending east through central NJ. Shown below is the 18z 4 km NAM forecast surface-based CAPE for 5 pm Sunday showing where the main surface features are predicted by this particular model. With dew points in the low 70s throughout the warm sector, extreme instability (surface-based CAPEs in excess of 2500 J/kg) will develop with the heating of the day along and south of the warm front from southeast PA/central NJ through eastern VA. 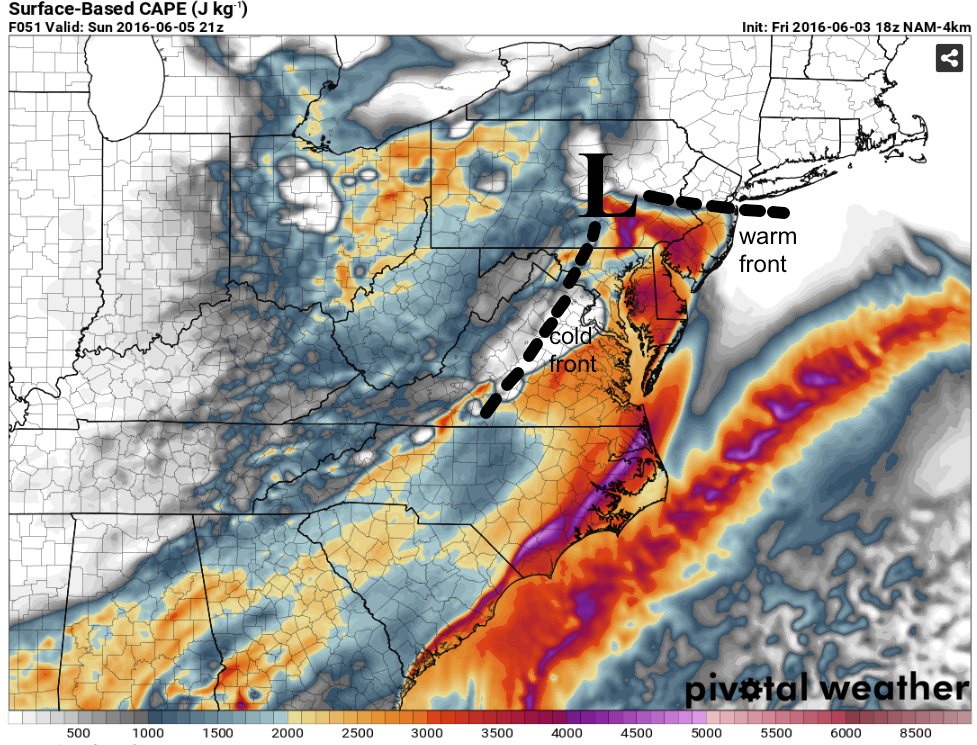 Storms will likely develop off the Appalachian mountains from south-central PA through VA by early afternoon, and quickly become supercellular with the strong mid and upper-level flow and extreme instability. Supercells likely will reach southeastern PA through DC/Baltimore area by 4-5 pm and the coast by 7-8 pm, possibly as a squall line by that point. Shown here is the 18z 4 km NAM depiction of storm evolution on Sunday afternoon.

With easterly surface winds along the warm front from southeast PA through central/southern NJ, any supercells that cross this boundary Sunday afternoon likely will have tornado potential. Forecast hodographs in the vicinity of the warm front (4 km NAM, 21z, eastern PA, below) show the enhancement of the low-level shear with the backed surface winds beneath 30 knot low-level jet, with greater than 20 knots of surface to 1 km shear and a storm motion that favors ingestion of largely stream-wise vorticity between this later. We will likely be targeting this warm front just east of the weak surface low in southeast PA as storms approach from the southwest by 3-4 pm. 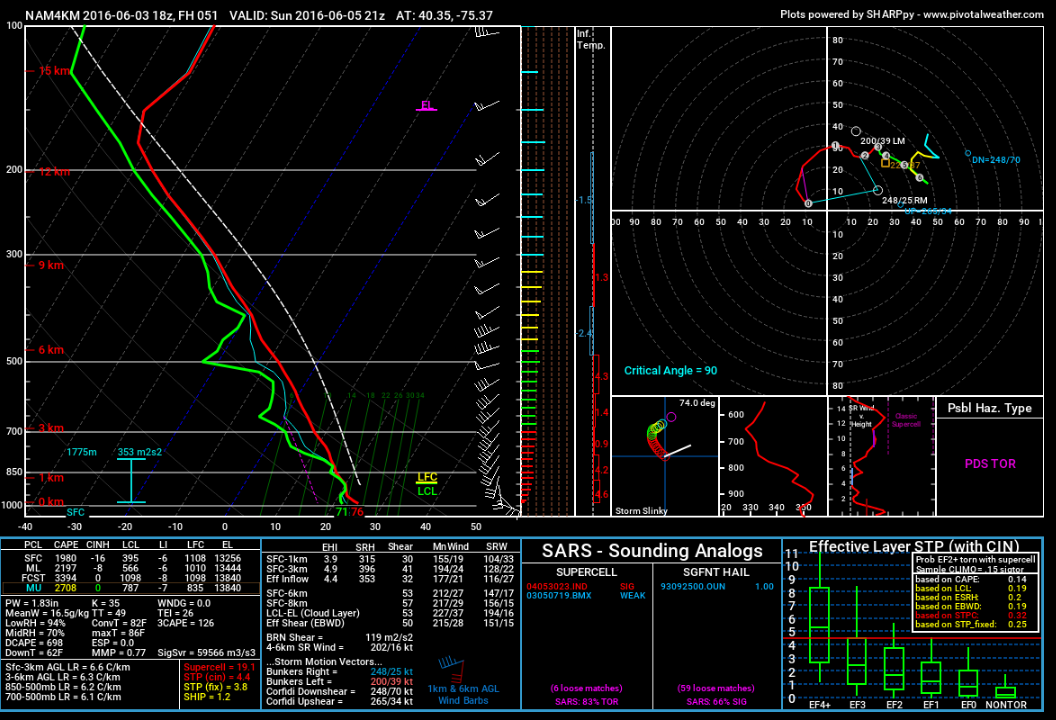 The environment even just south of the warm front and just east of the advancing cold front will be supportive of supercells and isolated tornadoes, despite the more southerly surface winds. Forecast hodographs even down to northeast VA through the DC/Baltimore areas are supportive of isolated tornadoes if storms remain isolated and surface-based through late afternoon/evening, with near 20 knots of 0-1 km shear and critical angles sufficiently close to 90 degrees given the magnitude of speed shear expected at low-levels. There also is uncertainty as to how far north the warm front will advance, so this forecast likely will be adjusted between now and Sunday morning based on new forecast model guidance. 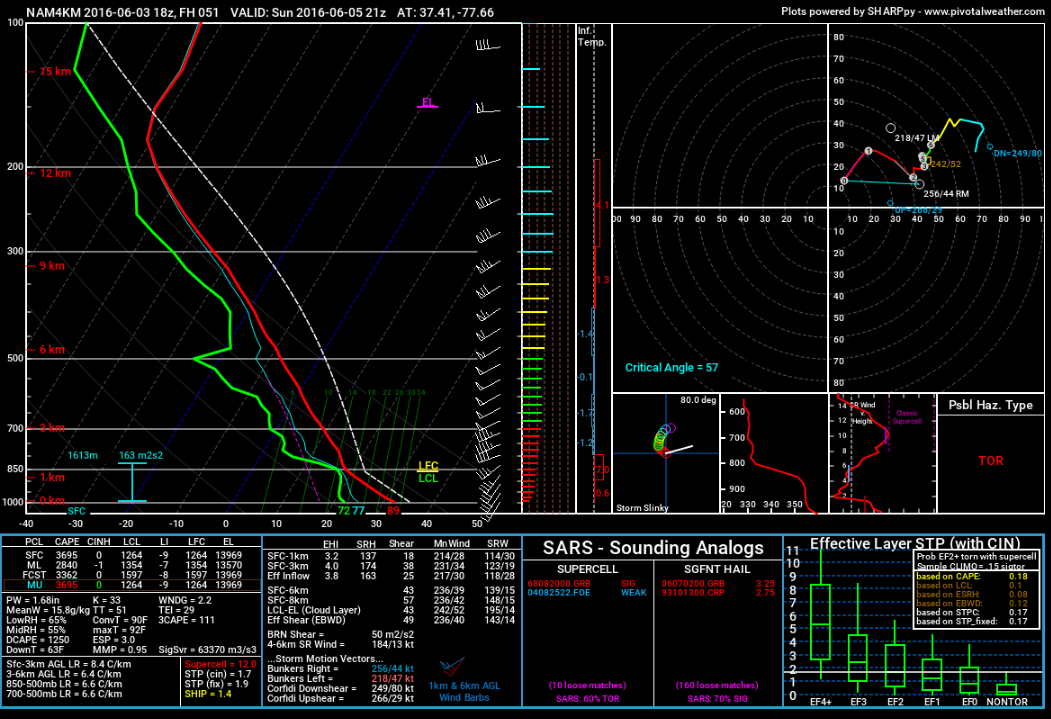